Comedy Central is getting into the spirit for Justin Bieber’s upcoming roast by pelting the performer with eggs in a promo video for the special. Bieber found himself in trouble last year as he faced charges after egging a neighbor’s house. 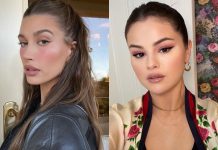 Selena Gomez and Hailey Bieber pose together and surprise fans

There’s A New Episode Of Between Two Ferns And Twitter Can’t...