So, you’ll remember that in early January Emily Ratajkowski broke up with music producer and then-boyfriend Jeff Magid after dating for four looong years. Well—two months later and now she’s now married to a new guy!

And we didn’t even know she was dating again!

The bombshell model wed actor and producer Sebastian Bear-McClard on Friday. Emily shared a series of photos on her Instagram announcing the understandably unexpected ceremony.

There was absolutely nothing conventional about this wedding. Not the timing (they’ve dated for two weeks!), not the place (apparently, they married at a New York City courthouse), not the guests (a pug and meme king The Fat Jewish), and most certainly not her bridal attire (an orange-colored pantsuit with a black hat and veil).

We can only wonder if this is the kind of wedding she’s always dreamed of, ’cause if it is—boy, she’s got quite the imagination!

Check some of the funniest, realest reactions to Emily Ratajkowski secret marriage in our photo gallery above! 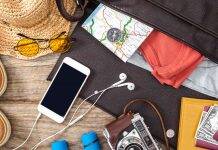 Top 9 Things That You Should Do Before a Trip