Moonman out, Moon Person in!

MTV has decided to change the name of its Video Music Award trophy to a more gender-neutral prize. In an interview, MTV president Chris McCarthy said the iconic Moonman—which has been passed on to music icons since 1984, ranging from Taylor Swift to Prince— will now be referred to as Moon Person.

The announcement of a gender-free space traveler is one more step towards a more gender fluid MTV. After creating gender-neutral categories for its TV and Movie Awards, MTV also dropped all gendered awards for its Video Music Awards show.  The Best Female and Best Male Video honors will be combined into one genderless Artist of the Year Moon Person trophy.

Just two months ago, Emma Watson became the first person to win in the Best Actor in a Movie category, after MTV decided to abolish gender-specific categories for its acting awards. “MTV’s move to create a genderless award for acting will mean something different to everyone,” Watson, who played Belle in the film, said of the network’s decision. “But to me it indicates that acting is about the ability to put yourself in someone else’s shoes and that doesn’t need to be separated into two different categories.”

Kendrick Lamar, Ariana Grande, Bruno Mars, and Lorde are some of the singers in the run to become the first gender-neutral music award in the upcoming August event. 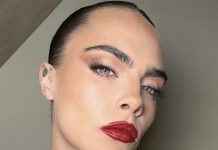 Cara Delevingne is spotted disoriented on the streets of L.A and...

SOS! A Jonas Brothers Reunion Is In The Works