Knowing me, knowing you, we’re sure this news will have you thanking ABBA for their new music!

I had a dream that one day, ABBA would get back together. And that day is finally here. So brace yourself for the endless ABBA puns because the 70’s Swedish pop sensation is taking a chance on music once again after a 35-year hiatus.

Agnetha, Benny, Björn and Anni-Frid are coming out with two brand new songs, as announced by the band in an Instagram post shared over the weekend that has fans screaming gimme, gimme, gimme the new music. “We all felt that after some 35 years, it could be fun to join forces again and go into the recording studio,” the statement reads. “So we did.”

And, mamma mia, their return to the studio resulted in two new songs, one of which, “I Still Have Faith in You,” will be featured in a TV special set to air in December on NBC and the BBC.

ABBA clearly knows the time is right for them because this epic reunion means money, money, money—and a lot of hilarious and highly relatable reactions from hardcore ABBA fans who are already laying all their love on the new songs.

There’s a sense of expectation hangin’ in the Twitter air for this ABBA comeback. Check out some of the best reactions in our photo gallery above. 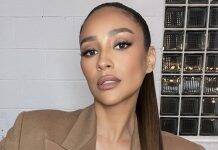 Shay Mitchell reveals the name of her second daughter, a tribute...