Earlier this week, Queen B released Homecoming, a Netflix film and live album documenting her iconic 2018 Coachella performance. But that’s not all she’s blessing us with in the upcoming days. Beyoncé’s Lemonade will finally be made available on all streaming services.

According to Variety, on April 23rd—which marks the third anniversary of Bey’s visual album, will make its way to Apple Music and Spotify.

Lemonade was originally released exclusively on Jay-Z’s Tidal. Costumers also had the opportunity to buy the album on iTunes. Since then, however, Beyoncé’s masterpiece has remained exclusive to her husband’s platform when it comes to streaming.

Regardless of its very limited release, Beyoncé’s Lemonade managed to become the #1 album of 2016, selling 2.5 million copies worldwide and picking up Grammys for best urban contemporary album and best music video.

April 23rd will be the first time that Beyoncé’s entire back catalog will be available on all major streaming services. So you better get in formation because Lemonade is finally getting the wider release we’ve all been waiting for! 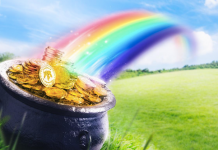 Can you chase the rainbow to win a pot of gold?