And your new Miss Universe is, college student and Colombian Paula Vega 22 who beat out more than 80 competitors Sunday night in Miami to take home the prestigious title of Miss Universe 2015.

Here are five fun facts about the Paula Vega:

1. Proud Resident: During the nerve-racking Q&A portion of the competition, Vega was asked to name the greatest contribution her country has given to the entire world. , she answered: “I believe that my country has been an example to be followed for the rest of the countries. We are persevering people…and we continue fighting. Today, we are world leaders in many different parts.”

2. Brain Power:  Vega is hard at work finishing her final semesters as a business administration student at the Universidad Javeriana in Bogota. She speaks Spanish, English and a little French.

3. Strange Sleeper: Like any beauty pageant contestant, Vega needs her beauty sleep. But in a surprise revelation, the she sleeps with her eyes wide open.

4. Can’t Stop Dancing: Every time the pageant queen has a break in the gym, Vega has a fun habit of breaking into dance. Just head over to her Instagram where she busts some moves during an afternoon Zumba session.

5. She’s a Family Girl: Raised with seven brothers and sisters by a cardiologist and the granddaughter of legendary tenor Gatsón Vega.

6. Sofia Vergara:  She is from the same home town as actress Sofia, Vergara Barranquilla, Columbia.  The two co-hosted for Spanish network Univision. 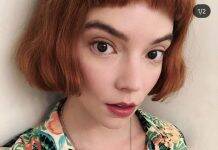 Anya Taylor-Joy reveals she almost fell down the stairs at the...