In a statement released today in Hollywood, Whitney Houston’s sister-in-law Pat Houston, President of the late pop icon’s estate, says potential viewers of an upcoming Lifetime Television biopic about the singer should “brace” themselves for the “worst. Whitney, would never allow her story to be told by an inexperienced team.”

On Friday, Pat posted the following statement on Whitney’s website: “My daughter came home from high school yesterday and shared with me inquiries she had endured from her peers and teachers about the upcoming TV movie about her aunt Whitney.”

“I say this to all Whitney’s family, friends and fan base, if you watch this movie, watch it knowing that Lifetime is notorious for making bad biopics of deceased celebrities and brace yourself for the worst,” she said, adding that “misrepresenting the term friendship to advance an agenda is not only disrespectful and dishonest but a slap in the face to her true and loyal friends.”

Yaya DaCosta was quoted it was “very difficult” to play Whitney Houston.

Lifetime and director Angela Bassett, who co-starred with Whitney in the 1995 movie ‘Waiting to Exhale’, have not commented on Pat’s remarks. The movie is Bassett’s directorial debut.

The Whitney biopic depicts the turbulent relationship between the singer and pop star Bobby Brown.

“We have dealt with her every emotion from the day she was born until the day she died, which gives us absolute position and absolute authority as a family to feel the way we do about her legacy,” Pat said.

Watch the trailer which stars Yaya DaCosta as Houston. The movie premieres tonight on Lifetime at 8 p.m. 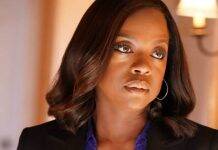