ABC confirmed today that Bruce Jenner will sit down with Diane Sawyer for a two-hour interview.

The program, which is being called ‘Bruce Jenner – The Interview’, will air on Friday, April 24 at 9 p.m. as a special edition of 20/20. The network did not release a lot of information about what exactly Jenner and Sawyer discuss for two hours, but it did call the interview “far-ranging” and “exclusive.”

There have been many unverified tabloid reports about Jenner’s transition; however, this will be the first time the former Olympian speaks about it publicly and on the record.  Jenner will also most likely use the interview to discuss whether E!’s planned documentary about his transition is going forward.

Keeping Up with the Kardashians, the season finale which airs May 31st will reportedly show Jenner coming out as transgender to the Kardashian-Jenner family.

We love and support you Bruce Jenner! 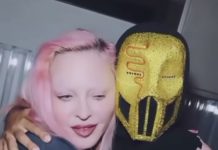