On Wednesday in Beverly Hills Writer/Creator/Executive Shonda Rhimes spoke at the TCA’s (Television Critics Association) summer press tour explaining why killed-off one of the most beloved characters on her hit show ‘Grey’s Anatomy.’

The is fact is, Dempsey, 49, decided to leave the ABC drama and there was no other option but to kill his character Derek Shepherd, a.k.a. “McDreamy.” Despite tabloid rumors she fired the actor for sleeping with one of the production staffers thus causing his now “divorce,” none of that appears to be true.

In an April episode, the surgeon was involved in a car crash that left him brain dead, resulting in Meredith being forced to make the heartbreaking decision to take him off life support leaving viewers in outrage and devastation.

Rhimes said… “Either Derek was going to walk out on Meredith and leave her high and dry, and what was that going to mean? That would suggest that love was not true, the thing we had said for 11 years was a lie and McDreamy wasn’t McDreamy. For me, that was untenable.”

Killing him off, therefore, keeps their love ‘forever frozen in time’, stated Rhimes. 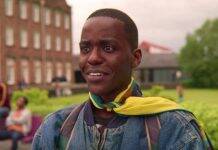