Usain Bolt flew through the finish line beating his fists against his chest as he defeated twice drug cheat Justin Gatlin for the second time in a week.  Then, he goes DOWN as he is slammed by a cameraman who lost control of his Segway. “He tried to kill me!‘I don’t know what he was going on. It was like: “You are winning too much, take him out!”

The cameraman took him out from behind and Bolt’s legs, surely the most prized in world sport, were taken from underneath him. Bolt fell to the floor but was quickly up on his feet again checking himself over for injury. With good humor Bolt said of his competitor…“The rumor I’m trying to start right now is that Justin Gatlin paid him off.”

Then there is more excitement as an overzealous fan was chased down the track and wrestled to the ground by security guards after leaping a barrier to try get a picture of the superstar athlete.

So much drama, it’s great! 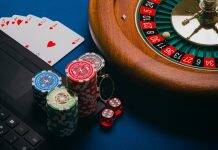