It’s been suspected that Angelina Jolie and Brad Pitt may be having marital issues given the content of their new movie ‘By the Sea’ (a married couple falling out of love due to infidelity – Jolie wrote and directed).

And, according to InTouch, Pitt, 51, may be having an affair with Sienna Miller 33. The two are currently working on the film, ‘The Lost City of Z,’ and it’s reportedly causing a rift between Brad and Angie.

Pitt is producing the film, and Miller is starring in alongside Robert Pattinson and Charlie Hunnam. The magazine reports that Pitt had been bringing up Miller’s name daily for months, and when he told Jolie, 40, that he was going to fly to Ireland to visit the set, she refused to let him go.

“Miller really gets under [Jolie’s] skin,” the magazine’s source claims. Pitt reportedly told Jolie to let him do his job as a producer when Jolie yelled that she didn’t want him near Miller. Pitt of course infamously fell in love with Jolie while they were filming ‘Mr. and Mrs. Smith’ while he was married to Jennifer Aniston.  Could this be pay back for Jolie?

To make matters worse, Miller was dating Jude Law while filming ‘Alfie’ and she was then rumored to have cheated on Law with Daniel Craig while filming ‘Layer Cake.’ Miller has admitted to having an affair with married actor Balthazar Getty in the past.  Way too much cheating going on!

‘By the Sea’ opens next month. 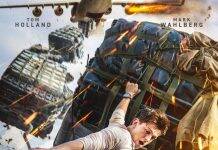