Mariah Carey has been rushed to hospital after falling severely ill with a serious bout of flu.

The “We Belong Together” singer is currently hooked up to intravenous treatment after she suddenly started feeling ill following an appearance at Pier 1 in New York on Tuesday, TMZ reports.

They are hopeful she will recover and be released in time for a scheduled performance at a holiday concert event in New Jersey on Saturday. 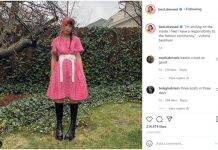