Wiz Khalifa has had his say on that time his baby mama Amber Rose revealed Kanye West’s sex secrets after he called her a stripper.

The 28-year-old rapper simply said that “It don’t matter when s%$# don’t matter, it don’t faze you.”

In an interview with GQ magazine, Khalifa said “I was listening to this song when I saw Kanye fire off that tweet…Bob Marley spoke up for what he believed in. Why would I regret it?”

The rapper of course refers to the infamous tweet that references “kk” – a marijuana reference rival rapper Kanye West mistook as a cryptic sexual invitation to his wife Kim Kardashian.

In response, Kanye launched a Twitter attack on Wiz before both the rappers’ ex-lover and model Amber Rose stepped in to shut Kanye up with a brutal tweet revealing their sordid sexual history.

West has since apologized to Khalifa with what was likely an incredible awkward phone call.

“I keep s#^$ brief. But for him, it’s no animosity, so it ain’t even no thing,” Khalifa said, adding that he did not reciprocate the feeling. “I have nothing to apologize for.” 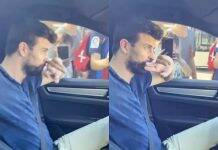 Piqué is caught listening to Shakira’s “Inevitable” in the car