Someone should give Bette Midler an honorary genealogy degree, because she just spotted a hilarious connection in the Kardashian/Jenner family tree.

The legendary performer mocked Rob Kardashian and his half-sister Kylie Jenner after she mapped out that the two might be sharing a step-child in the near future.

“Rob Kardashian’s engaged to the MOTHER of the child of Kylie Jenner’s boyfriend?” she asked on Twitter. “They’ll share a stepchild? Somebody send me a chart!”

That might indeed be the case after Rob Kardashian popped the question to Blac Chyna – the mother of Kylie Jenner’s boyfriend Tyga’s child.

The 70-year-old singer has a bit of a history with Kardashian slamming. She recently also made fun of Kim after she posted a naked selfie for the umpteenth time. Her joke prompted Kim to call Midler a “fake friend.”

At least Tyga seems to be happy about all this.

35 Photos of Reagan-Era Stars Then and Now 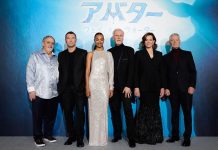 First week of ‘Avatar 2’ generates millions at the box office