Kourtney Kardashian has said that she would be “so happy” if Keeping Up with the Kardashians ended.

The 37-year-old reality star said that every time filming for a season of the show wraps up, she feels like she has had enough.

“I don’t want the show to end, but I sometimes think I would be so happy if it did and I could just move away from it all,” she told YOU magazine. However, she admits the feeling passes.

“By the end of every season I’ve had enough, but then once we have had a break I’m ready for more.”

The brunette beauty also revealed that she often forgets how recognisable she is as a result of the show, saying: “I still feel surprised when I’m recognised in the street.”

“I forget that so many people know who I am and have seen me give birth,” she said referencing the fact that cameras were rolling when she delivered her oldest children, Penelope, 4, and Mason, 6. 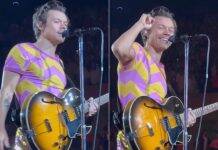