Richard Branson is happy to live to tell of how he almost died in a serious bicycle accident on Wednesday.

The businessman released a statement on his company Virgin’s official website to confirm that he escaped with relatively few injuries.

“I was heading down a hill towards Leverick Bay when it suddenly got really dark and I managed to hit a ‘sleeping policeman’ hump in the road head on,” he wrote.

“I really thought I was going to die. I went flying head-first towards the concrete road, but fortunately my shoulder and cheek took the brunt of the impact…”

The 66-year-old then went on to describe his injuries, writing that his “cheek has been badly damaged and my knee, chin, shoulder and body severely cut.”

Branson’s assistant reportedly found him after the crash and a fellow cyclist helped them patch the adventurous entrepreneur back up.

X-rays have since revealed that Branson cracked his cheek and he will be nursing some torn ligaments.

Def not a look for Olivia Pope but darling on Kerry... 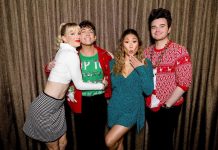