Brad Pitt and Angelina Jolie have been drifting apart longer than we originally thought and they even recently started living in separate corners of the home.

Sources close to the couple said they have been living in separate parts of their 80,000 sq ft Hollywood Hills estate leading up to the divorce filing last week.

“Angelina basically had her own wing and he had his. They began living these separate lives,” a source told Us Weekly. “Their arguments progressively became more frequent.”

It has also been reported that Brad was talking to his pals about his relationship while working on the film Allied and Angelina was definitely not okay with it.

“She cannot deal with anyone talking about their business,” the source confirmed.

We reported early last week that the 41-year-old actress took Brad by surprise when she filed for divorce and moved their kids Maddox (15), Pax (12), Zahara (11), Shiloh (10) and 8-year-old twins Knox and Vivienne out of their shared home.

Angelina also filed for sole physical custody of them and that battle is gearing up to be one of the most epic celebrity legal battles ever. 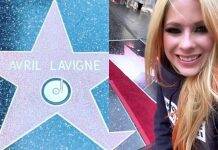 Avril Lavigne inaugurates her star on the Hollywood Walk of Fame:...