Rob Kardashian has just had another online meltdown and deleted all of his Instagram photos.

The 29-year-old reality TV star also took the drastic step of unfollowing all of his friends and family on the photo sharing social network.

That includes his fiancé Blac Chyna, who he has unfollowed more than once already!

The sock designer offered no explanation, but it came shortly after he started following his half-sister Kylie Jenner’s boyfriend Tyga…who is also the father of his fiancé’s son.

The 26-year-old rapper dated Chyna from 2011 until 2014 and their son King Cairo is three years old.

We reported in July that Rob, who has 7.1 million Instagram followers, removed all pics of his bride-to-be from his account.

A source close to the couple then revealed it was after the couple had a bit of a falling out while filming for their new reality show, but they made up shortly thereafter.

“They fought and then started talking again yesterday,” the source said at the time.

“It was just a fight. It was from the pressure of filming the show and everything moving too fast. Rob is just not used to filming again, and it’s been hard on him.” 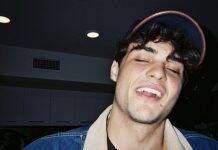