Drake was a no-show for a gig in Abu Dhabi that he was paid roughly $250 000 to perform on Saturday.

The rapper was booked to perform at the pop-up nightclub VIP ROOM in the capital of the United Arab Emirates, but he did not show despite being paid in advance.

A rep for the rapper gave British newspaper Mirror a bizarre excuse, claiming: “Due to Drake’s overwhelming popularity the sheer number of people that turned up outside of VIP ROOM made it completely unsafe for Drake to even enter the venue in the end so he was unable to perform.”

“Saying that he will still be performing at VIP Room tonight alongside other celebrity guests.”

Sources close the rapper, however, told the publication his performance was cut for other reasons.

“His management had an argument with the management of Abu Dhabi pop-up nightclub VIP ROOM last night and he didn’t turn up for an appearance that he’d been paid £200k for,” the source said.

“DJ Bliss, the most famous DJ in the Middle East, had to play all night as Drake was a no-show.”

Drake was also set to appear on Sunday night, but no reports about whether he did have surfaced yet. 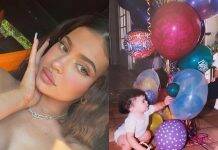