The Lost City of Z actor Robert Pattinson denies disliking co-star Charlie Hunnam, but seems to be talking around the subject of whether there was tension between the thespians on set.

Pattinson is speaking out in response to Hunnam’s late March comments, which implied that Pattinson put off unfriendly vibes during filming. “I don’t think I said more than 10 words to Robert off camera. I didn’t know if he was just in that zone or if he genuinely didn’t like me. There was a real distance between us,” Hunnam told a reporter from SheKnows.

The accused former Twilight heart-throb seemed more bemused than upset in response. In an interview with Mirror published last night, Pattinson confessed that there was a quiet, chilly atmosphere around the set when the pair were together. “I didn’t ignore him…whatever. I thought he was avoiding me,” he said tersely.

The 2 actors had better learn to get along quickly. A full-fledged promotional tour for The Lost City of Z is underway to coincide with the film’s release in theaters. Hollywood makeup tycoon Kari Koerper tagged Robert and Charlie together on an Instagram post yesterday, showing off how she made the boys look on camera with a side-by-side photo.

But Pattinson, who plays Corporal Henry Costin in the feature, is notably missing from his chair in the split-image shot of Hunnam. 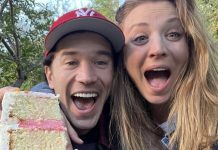 Kaley Cuoco is pregnant with her first child with Tom Pelphrey