A terrible blow to our already weakened faith in love could be right around the corner.

A few days ago, international media started speculating that Shakira and Piqué, one of the show biz’ strongest couples, are on the brink of separation after six years and two children together.

Although their split is nothing but rumors yet, there are some “hints” that have triggered the alarms and have the fans of the Colombian and the Spanish (and us too) at the edge of their seats. And to be quite honest, these clues don’t seem so far-fetched.

The couple was last seen together in June this year, at Lionel Messi and Antonella Rocuzzo’s wedding. This was also the last time Shakira posted a picture next to Gerard on Instagram.

As for Piqué, it’s been even longer since he published anything about his relationship with Shak. Earlier this year, in March, he posted a video featuring the Hips Don’t Lie singer and their sons Milan, 4, and Sasha, 2. That was Shakira’s last appearance on the soccer player’s social media.

Although the lack of romantic posts is certainly strange given that the couple is so used to brag about their love on Instagram, Facebook, and Twitter, that’s not even close to being the worst of the clues.

During the last Catalan soccer classic between Barcelona and Epanyol, Piqué celebrated his goal at the 86th minute in a very unusual way. Instead of doing his already classic “2 and 2” celebration, symbol of his and the barranquillera’s birthday, Gerard celebrated with an unexpected twist. He crossed his arms, lifted them up, and while in one hand he made at two, in the other he just…flipped it off.

What was he trying to say?!

However, despite all these evidence, there are many that still rule out the Shakira and Piqué’s separation, especially because just yesterday, the day of the release of the singer’s new video, Perro Fiel, Piqué twitted about the premiere.

Could it be that Piqué is sad about the absence of Shakira due to the beginning of her El Dorado World Tour? Or are they just having couple issues like the rest of us?

Only time will tell… 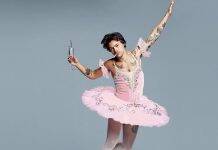 Harry Styles named ‘the new King Of Pop’ and nephew of...