The story began circulating in August. And today, almost two months later, the rumor has finally been confirmed. Leo and Antonella are expecting their third baby!

Just a few days after celebrating Mother’s Day in Argentina, the soccer star and his new bride shared with the world the news that we were all waiting to hear. A new baby will be joining the Messi-Roccuzzo family!

The news was confirmed by Antonella herself, who posted a cute family portrait on Thursday, alongside Lionel and their two sons, Thiago and Mateo, rubbing her barely-existent baby bump.

“Family of five #Blessed,” the soon-to-be mother of three captioned the picture, taken now that she’s entering her second trimester.

Neither Leo nor Anto have shared any more details on their pregnancy. However, according to the local media, the family already knows the gender of their little bundle of joy. Reportedly, the Barcelona striker and his wife are expecting a third boy.

The little man, whose name is still unknown, will be born in a private clinic in Barcelona, ​​just like it happened with his older brothers.

Lionel and Antonella got married just four months ago, in a highly anticipated ceremony with over 300 guests. The couple spent their honeymoon in the Caribbean, where, according to the Argentinian press, their new baby was conceived.

Congratulations to the Messi-Roccuzzo family!

Caitlyn Jenner: I dressed up with Kris 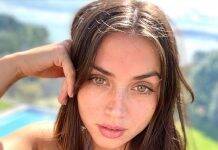