At age 50, Matt LeBlanc has become one of the most handsome silver foxes in the entertainment industry. But it turns out that his mature-man look that we so love started even before he turned 30.

In an interview on The Late Late Show with James Corden, the actor confessed that he started going gray “in like, the second season of Friends, way back then”, so they began dying his hair black for the sake of his character.

However, the coloring process always took too long—something that bothered LeBlanc. Until one day, while at the supermarket, he came across with a hair treatment that not only promised to be much faster than a traditional dye, but also equally effective.

“Is it the same stuff ’cause it takes you two hours and can I do it with this stuff five minutes at my house,” the actor asked his stylist. “It’s the same stuff,” the expert patiently replied.

However, despite his revolutionary “discovery”, Matt’s first attempt wasn’t necessarily what he expected. The stylist forgot to share with him a crucial piece of advice: a thin protective layer of Vaseline to shield the ears from the dye. And so, the actor ended up going to work with his “ears all black.”

LeBlac explained that he continued to dye his hair until his character Joey came to an end in 2006, when he finally embraced his gray crown. And we completely agree with what Corden said about that look—it was “a triumph.”

Where Are They Now? The Cast of The Mummy Trilogy

75 Years of Harrison Ford In 14 Pictures 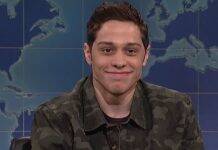