Multiple fires in Southern California have forced thousands to evacuate their homes, including residents of the exclusive Beverly Hills area, like Paris Hilton, Lea Michele, and many more A-listers.

“This wild fire in LA is terrifying! My house is now being evacuated to get all of my pets out of there safely,” the socialite wrote to her twitter followers. “Thank you to all the firefighters who are risking their lives to save ours. You are true heroes!”

Lea Michele also chose not to take any chances and packed her bags. “Praying for everyone in LA… grabbed what I loved most this morning and so grateful to my friends for taking us in…” she wrote on social media.

Host and comedian Chelsea Handler didn’t miss the opportunity to bash President Trump, even right in the middle of the evacuation. “It’s like Donald Trump is setting the world on fire. Literally and figuratively,” she wrote on Twitter.

Other artists, like Lionel Richie, had to reorganize their working schedules to help their families evacuate to a safer place. “I unfortunately have to cancel my show tonight. I look forward to returning to the stage this weekend and performing for my fans,” he tweeted.

“Never thought I’d get to actually play what I though was a hypothetical game of what would you grab if there were a fire,” Chrissy Teigen wrote on her favorite social platform, Twitter. “So far all I have is Luna, some limited edition Oreos and my Spike TV award,” she joked.

The homes of actresses Gwyneth Paltrow, Reese Witherspoon, Jennifer Garner and TV host Mari Shriver, located in the Mandeville Canyon community and the Brentwood area, are also in evacuation areas. 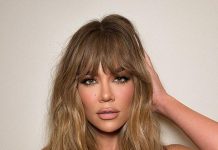 Trendy | A Dress Over Pants? Rita Ora Shows How It’s...