Finding the perfect balance between family life and romance is never an easy task—not even for a Kardashian.

In the latest episode of Keeping Up With The Kardashians, the eldest sister of the famous clan opened up about the difficulties of spending time with her boyfriend, young model Younes Bendjima, without neglecting her three children—Mason, Penelope, and Reign.

“Just because those worlds aren’t colliding right now, just making sure that I make time for both. And I think going on a trip once in a while reminds me the importance of being present and in the moment when I’m home. And I think it makes me the best mom I can be.”

The episode, premiered on Sunday night, was filmed during the early stages of her romance with Younes, when the couples decided to take a trip together to Egypt. At the time, the TV star’s boyfriend had not met Kourtney and Scott’s kids yet.

Shortly after the trip, an insider said of Kardashian’s new romance: “It’s definitely serious. No one thought their relationship would last this long, but Kourtney is very happy.”

“Younes has met her kids. Kourtney’s family really likes him. He is the opposite of Scott. He doesn’t party, isn’t flashy and really treats Kourtney with a lot of respect. It’s obvious that he really cares about Kourtney.”

Meanwhile, Scott Disick, Kardashian’s former partner, is in a relationship with 19-year-old model Sofia Richie, with whom he spent the weekend in Mexico. After dating for about eight months, Sofia still hasn’t met Scott’s kids.

It seems that Younes and Kourt have a lead in the children department! 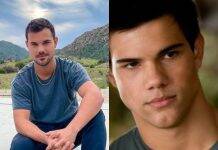 Taylor Lautner reveals he would return to play Jacob from ‘Twilight’:...

‘Fate: The Winx Saga’ Canceled by Netflix After 2 Seasons