Just when we thought we had a chance with Ed…

After dating for almost three years, and over a decade of being the singer’s high school crush, Ed Sheeran and his girlfriend, now fiancée, Cherry Seaborn are set to become husband and (oh, so very lucky) wife.

While the couple has been engaged since last year, it wasn’t until Saturday morning that the Shape of You singer decided to share the happy, yet devastating to many, new with his followers on Instagram.

“Got myself a fiancée just before new year. We are very happy and in love, and our cats are chuffed as well,” the singer joked.

The couple met when they were just 11, attending Thomas Mills High School in Framlingham, Suffolk. Sheeran is sad to have had a major crush on her when they were teenagers, but it wasn’t until 2015 that they started dating after reconnecting at one of Taylor Swift’s classic 4th of July parties.

Unlike Sheeran, Seaborn lives away from the spotlight working as a risk advisor consultant on Wall Street in New York. Although she did become sort of a hockey star after she helped England U21’s win the bronze medal at the 2012 European Championship.

“This has been the first time I’ve ever actually had the time to fall in love properly,” the singer said of his relationship with Cherry in an interview in 2016. “I’ve always got into relationships very passionately – I’m a redhead and also Irish,” he joked.

No. We’re not ready to see our soulmate marry some other woman and start a family with her. We’re still happy for Ed, though. Congratulations to the happy couple! 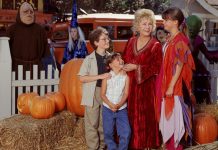 Halloween Movies to Watch All Year on Disney+