The couple officially started dating last summer, after they were caught in full PDA while the two were aboard a yacht in Turkey—much to the dismay of Meeks’ wife.

Shortly after the photos made the media round, Melissa said that her husband had told her he was going on a business trip. She later added that the stress over her husband’s affair had likely cause her to have a miscarriage.

Jeremy field for divorce in October 2017, after 8 years of marriage. Since then, Meeks and Green haven’t been shy about showing off their romance in front of the cameras as well as on social media.

“Thank you for loving me the way you do and for making this amazing birthday,” the billionaire heiress wrote on Instagram on her 27th birthday. “You’ve spoiled me beyond belief!”

Meeks rose to international fame in 2014 after his smoldering mugshot viral. In 2016, Meeks was hired by White Cross Management modeling agency immediately after his release from prison and made his New York Fashion Week debut the following year.

After all, his time in prison may be the best thing that has ever happened to Jeremy! 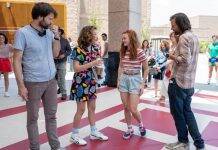 The Duffer Brothers talk about the fifth and final season of...