For some months now, Shawn Mendes and Hailey Baldwin have unleashed rumors of an alleged romance, although none of them has confirmed the relationship—at least openly. But they say a picture is worth a thousand words, and this last publication on Instagram may be the confirmation we were all waiting for!

The photo, shared on Tuesday on the singer’s Instagram, shows Baldwin wearing a white cropped top showing off her defined abs, with Mendes standing next to her, wearing a contrasting navy-blue sweater, arms crossed and leaning against the wall.

Although at first glance the post might seem like just another photo—and although the captioned is nothing but two camera emojis—, for those who have followed Shawn and Hailey’s story from the very beginning, the image is an important step in their relationship.

And as if the photo wasn’t enough, many stars expressed their approval by liking the photo, including celebrities such as Paris Jackson, Kelly Osbourne, Calvin Harris, Rita Ora, Zedd, and, of course, Hailey herself.

The attractive couple sparked rumors of romance for the first time in October 2017, when they were seen holding hands during the Halloween party of her fellow models and friends Kendall Jenner and Justine Skye. That same year in December, Shawn and Mendes enjoyed a romantic getaway in Toronto. And now, six months after this love story began, the picture confirms that the relationship is still going strong.

I think we’re getting closer and closer to an official confirmation! 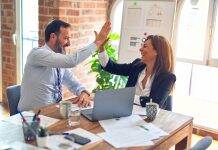