It seems that Brooklyn and Chloé have broken up… again.

The oldest son of David and Victoria was spotted kissing Canadian Playboy model Lexi Wood in West Hollywood over the weekend. The romantic encounter occurred while Beckham was visiting Doctor Woo’s tattoo parlor.

So, that’s got to mean Brooklyn and Chloé have split again, right?

As if the passionate kissing session wasn’t enough proof, the couple (or former couple?) haven’t been spotted together for some time now, and their last posts on Instagram about each other were around Valentine’s Day. However, both Chloé and Brooklyn are still following each other’s profiles on social media at the time of this publication.

Over the past few years, Beckham and Moretz have had a tumultuous relationship with multiple breakups and reconciliations. In December, it was rumored that the two were engaged after she shared a photo of them wearing matching rings, just weeks after they had gotten back together in September.

In an interview with People, Chloé opened up about her relationship with Brooklyn. “I think we chose each other. I think we really understand each other. It’s been years now, off and on, and it’s just one of those things where you come back and it’s like no time was spent away from each other and that’s the most important thing.”

Will Beckham and Moretz choose each other again after Lexi Wood stepping into the picture? 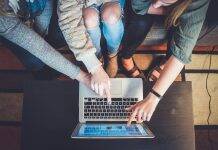