Matt LeBlanc has revealed he will quit Top Gear after the upcoming season of the long-running BBC motoring program, saying he was no longer “comfortable” splitting his time between the US and the UK.

In a statement, LeBlanc said: “My experience on Top Gear has been great fun. I have thoroughly enjoyed working with the whole team.” But he added: “The time commitment and extensive travel required to present Top Gear takes me away from my family and friends more than I’m comfortable with. It’s unfortunate, but for these reasons I will not be continuing my involvement with the show.”

In addition, his sitcom Man With A Plan was renewed for a third season.

LeBlanc—the fifth presenter to leave the show in the past two years—joined the BBC2 show with Chris Evans, Rory Reid and Chris Harris in 2016.

The actor was a surprise addition following the sudden departure of longtime presenters Jeremy Clarkson, Richard Hammond and James May, who all left in 2015 after Clarkson was fired for punching a producer.

A Top Gear source said: “The show will now struggle to remain relevant without a big name at the helm. The Beeb [BBC] have been left with a headache as a result now.”

Ed Sheeran Is Engaged To Longtime Girlfriend And The Internet Is... 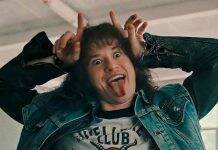