Don’t worry. His beautiful face got away without a scratch.

In what probably was a stunt-worthy-like scene, George Clooney suffered a non-serious injury Tuesday morning while riding a motorcycle in Italy, local police and hospital officials have reported.

The incident took place around 8:00 AM as he was leaving his hotel and heading to a film set when a car cut his path at the intersection and collided with him.

Though Clooney was rushed to the hospital in an ambulance and even given an MRI scan, an official has confirmed that the 57-year-old actor was quickly dismissed with no wounds, other than a small knee injury.

The accident happened in Sardinia, where the heartthrob is plotting his big return to the small screen with filming of his new TV series Carch-22, based on the eponymous classic 1961 novel by Joseph Heller.

The American star has had a long affinity with Italy. Not only has he had a home on the Lake Como for many years, but Clooney even married his wife—and mother of his two children—, Amal Alamuddin, in Venice in 2014.

Hopefully his Italian crash won’t scare him from coming back to the Venice Film Festival, because we definitely couldn’t survive without George Clooney’s ever-dashing tuxedos pictures on the red carpet! 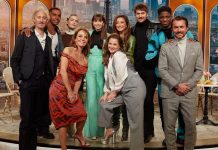