The world still hasn’t been able to figure out what happened to Amelia Earhart, who the heck makes those perfect crop circles, or whether Russia in fact hacked and influenced the U.S. elections. But, hey, we might have cracked open the mystery of Ariana Grande and Pete Davidson’s wedding date.

After the No Tears Left To Cry singer got the number 8418 tattooed on her feet in honor of the comedian’s late dad—it was his badge number when he was a firefighter in New York City—, a rumor that the hottest new it couple is getting married on August 4th (YES, as in next freaking month), has started swirling around on social media. And detective Twitter is quaking.

The fan theory is solid considering the significance of the number to Pete and it would be a great way to remember the late firefighter on the day of their wedding. Not to mention the rushed wedding would be right on time with how their whirlwind relationship is moving. 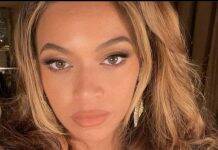