“Thanos, if you’re listening to this tape, you’re too late…”

There are far more than 13 reasons why we can’t wait to watch Avengers 4. And the recent news that Katherine Langford has joined the cast of the most anticipated superhero movie in history is yet another one.

According to The Wrap, the Netflix star will have a role in the Marvel sequel. Not only that, but the 22-year-old actress has shot all of her scenes already. Details on which character she’ll be playing, however, are still under wraps.

Katherine Langford fame when she starred in 13 Reasons Why. She is set to reprise her role as Hannah Baker in the second season of the show. Langford is also set to play the lead role in Netflix’s Cursed, which is a “spin on the tale of King Arthur.”

It has also been reported that the highly anticipated first trailer for the Infinity War follow-up will definitely be with us before the end of the year. So maybe we’ll get a better idea of who Katherine Langford will be playing then! Or perhaps we’ll even have to wait until Avengers 4 itself…. 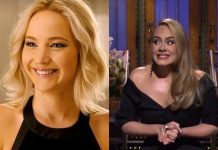 Jennifer Lawrence says Adele advised her not to do ‘Passengers’