While some celebrities are gasping for as much privacy as they can, others are giving away their private information. Ashton Kutcher tweeted out his phone number and here’s why.

No, you’re not being Punk’d. Ashton Kutcher really did share a phone number— HIS phone number— with all of his 18 million Twitter followers. And though he said he misses having “a real connection” with his fans, he also admitted he might not be able to respond to everyone.

“I miss having a real connection w/ real people,” the actor tweeted. “My Community. From now on you can just text me. I won’t be able to respond to everyone but at least we can be real w/ each other & I can share the unedited latest & greatest in my world.”

Kutcher ended the tweet with “+1 (319) 519-05676 Yes this is my #.” The area code revealed his services is still based in his hometown of Iowa City, which his applauded as a way of grounding himself outside of Hollywood.

The number he shared is connected to a service provider called Community, which, according to its privacy policy, allows subscribers to send messages to their “fans and followers.”

So yes, Ashton Kutcher tweeted out his phone number. But something tells us this is just a very creative PR stunt to lure us into one of Ashton’s new tech investments.

Which Celebrities Are Celiacs? 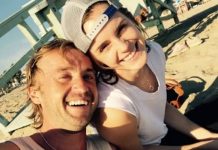 Is Angelina Jolie Considering A Career In Politics?