2019 marks 15 years since the infamous “Nipplegate,” but the NFL still can’t seem to shake it. Especially not after Adam Levine’s shirtless Super Bowl halftime performance.

Controversy found its way back into the spotlight at the Super Bowl XXXVIII halftime show after Maroon 5 frontman concluded the band’s show by performing Moves Like Jagger shirtless. Their performance drew comparisons to the 2004’s halftime show, when headliner Janet Jackson experienced a wardrobe malfunction that exposer her breast to the 143 million viewers.

People on social media quickly pointed out that Levine won’t face any of the consequences that Jackson did for showing his unclothed nipples, proving how absurd, hypocritical, racist and sexist that puritanical hysteria over Janet’s book really was.

Click through our photo gallery above to see the reactions to Adam Levine’s shirtless Super Bowl halftime performance.

Iggy Azalea: I have no connection with Australia 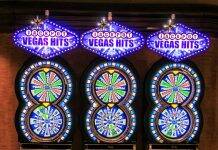 Is the slots gameplay hard?

Kesha Admits To Past Eating Disorder And Days She “Hated” Herself...