Pete Davidson and Kate Beckinsale haven’t officially confirmed they are an item. However, they at least have the approval of the SNL star’s ex-fiancée Ariana Grande.

The reigning queen of pop was caught leaving Westwood One Radio Networks in L.A. earlier this week. And, understandably, reporters couldn’t help but ask her opinion on Davidson’s blossoming romance with the British actress.

When a paparazzo asked Grande if she thought her ex and Beckinsale made a good couple, she kept her response short and sweet, simply yellowing “so cute.”

As the comedians seems to me moving on from the devastating split, it seems that the singer isn’t really phased at all about this new pairing because music is all that is on her mind. “Ariana isn’t bothered at all,” multiple insiders have said. “The focus is entirely on the album coming out on Friday and can’t wait for fans to hear.”

Pete Davidson and Kate Beckinsale have tried to remain under the radar about their time together. However, that hasn’t stopped fans from speculating about the pair after they were spotted holding hands while leaving his comedy show in L.A.

Rumors that Pete and Kate are together came just days after Ariana Grande unveiled the tracklist for her fifth studio album Thank U, Next—her second in six months. 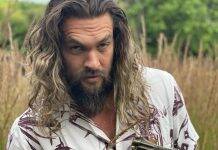