Seems like Danielle Jonas isn’t the only one feuding with Nick’s wife. Though not too long ago they were besties, Priyanka Chopra and Meghan Markle’s friendship is now reportedly on the rocks.

The actress’s absence at the Duchess of Sussex’ New York baby shower last month has not escaped comment, with outlets claiming that Chopra was “crushed” that Markle skipped her nuptials to Nick Jonas even though she did attend her royal wedding.

“Their friendship is over unless Meghan apologized,” said one source. “Priyanka is a huge international star with tremendous social media following. She is probably more famous worldwide than Meghan is. She feels Meghan didn’t respect her, and didn’t respect their friendship.”

Had Priyanka attended the event, she would’ve been in A-list company. Serena Williams and Amal Clooney co-hosted the intimate yet lavish shower in a $75k-per night penthouse suite at The Mark Hotel. However, Chopra’s reported excuse for not accompanying Meghan is that she was “bogged down” in Los Angeles with meetings about a book she is writing.

She might as well had just said she was busy filming the new Jonas Brother’s music video for Sucker!

Could this be the end of Priyanka Chopra and Meghan Markle’s friendship? 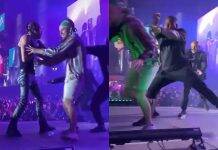 Lil Baby fan is pushed off stage by security at rapper’s...