While nothing appears to be wrong at first glance, his very first picture shows that Psalm West’s health could be at risk. Concerned fans were quick to point out that the deadly sleeping arrangement of Kim Kardashian and Kanye West’s newborn isn’t safe and could put him at risk for Sudden Infant Death Syndrome (SIDS).

Last week the now-mother-of-four shared a screenshot of her baby boy sleeping in his crib peacefully surrounded by blankets and pillows. And while most people were losing their minds over the kid’s unusual name, some eagle-eyed parents and doctors were more concerned about his health and didn’t hesitate to tell Kim what she was doing wrong.

“Please please please go pay an overprices ‘sleep consultant’ to get all that unnecessary padding, bumpers, and blankets out of your child’s crib so they are not at risk for SIDS,” an ER doctor commented. He continued: “I’ve tried and failed to resuscitate too many children that have died this way.”

Another added: “1. Congrats! 2. Anyone else freaking out about all the blankets & bumpers?! American Academy of Pediatrics recommends keeping the crib free of blankets & pillows until baby is 12 months old, as these can create a suffocation hazard.”

While Psalm West’s health might very well be at risk, we’re going to go ahead and cut poor Kimmy some slack and recognize the fact that a) she’s already done this 3 times, and, most importantly, b) there’s a pretty big chance she did splurge in a fancy “sleep consultant.” 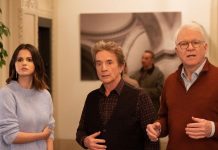 Meryl Streep and Paul Rudd join the cast of “Only Murders...