Anyone who has ever been out of work understands how emotionally difficult and demoralizing unemployment can ben. So it shouldn’t come as a surprise that the reaction to Gaten Matarazzo’s new prank show, which targets job seekers, is being universally negative—and for good reason.

“Each episode of this terrifying and hilarious prank show takes two complete strangers who each think they’re starting their first day at a new job,” a Netflix press released describes Prank Encounters. “It’s business as usual until their paths collide and these part-time jobs turn into full-time nightmares.”

Shortly after the announcement of the show, people took to social media pleaded Netflix to pull the plug on Prank Encounters. Fans of Gaten Matarazzo, who is hosting the new series, even begged him to reconsider participating in this “cruel” project.

Following the backlash over Gaten Matarazzo’s new prank show, a Netflix spokesperson issued a statement saying: “The pranks in Prank Encounters are spooky, supernatural, and over the top, and everyone had a great time. All participants came in with the expectation this was a one-day, hourly gig and everyone got paid for their time.”

Seems to us that the Stranger Things star should probably stick to fighting Demogorgons. 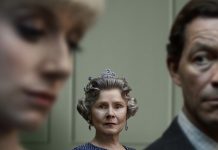 ‘The Crown’ gets a season 5 trailer. See details

“Monotonía”: Shakira hits the top of iTunes in 10 countries