It’s only been 2 weeks since their breakup, but the Coldplay frontman seems to be moving on from Dakota Johnson. Chris Martin and Dua Lipa were caught locking lips at Glastonbury Festival over the weekend.

According to reports, the 42-year-old singer cozied up backstage with 23-year-old pop beauty, exactly like it happened two years ago, when they shared a brief romantic encounter at 2017 Glastonbury.

“As soon as Chris caught Dua’s eye, he was over like a shot—and he didn’t leave her side all night. She seemed happy to be in his company,” a source told tabloid The Sun. “There was clearly a lot of chemistry between them—and when they headed to the Guerilla bar in the Shangri-La area, he saw his moment and they shared a kiss.”

Despite reports that Chris Martin and Dua Lipa were caught kissing, sources close to the British musician are coming forward to denies the allegedly false claims.

As reported by the Daily Mail, Martin’s rep can “confirm” the pair “did not kiss” and are “just friends.”

Kiss or no kiss, however, there is no denying the fact that both parties are freshly single.

Only two weeks ago, news broke that Chris Martin and Fifty Shades of Grey actress Dakota Johnson split after almost two years together. Dua Lipa is also recently single after splitting from her long-term boyfriend, model and chef Isaac Carew.

Now that Chris Martin and Dua Lipa are seemingly together, does that mean we can except a new collaboration in the near future? 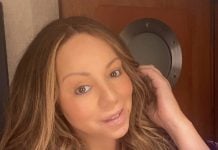