Last Wednesday (15), Prime Video released the teaser for “My Policeman”, the romantic drama with a love triangle between Harry Styles, Emma Corrin and David Dawson.

The plot follows the lives of police officer Tom (Styles) and teacher Marion (Corrin), a young couple in love living in Brighton in the 1950s. But Tom falls in love with Patrick (Dawson), the handsome curator of the museum. At a time when same-sex marriage was considered a crime, Tom and Patrick must keep everything a secret. Decades later, they are reunited and feelings resurface.

++Zendaya speaks out after pregnancy rumors

“My Policeman” is directed by Michael Grandage and is based on the novel of the same name by Bethan Roberts. In addition to the main stars, Gina Mckee, Linus Roache and Rupert Everett are part of the cast.

The film hits theaters on October 22 and on Prime Video November 4.

Naya Rivera Pulls The Plug On Divorce from Ryan Dorsey 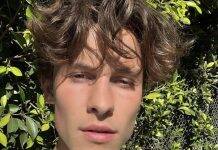