Mad Man is one of those shows that completely revolutionized the history of TV. Matthew Weiner’s masterpieces was capable of being extremely raw and ironic, while it also managed to be beautifully introspective and nostalgic.

It’s been ten years since we were delighted with the first episode of Mad Man. We watched Peggy Olson, Pete Campbell, Joan Holloway, Roger Sterling, and of course, the one and only Don Draper learn, grow and even pretend to embrace a computer.

After seven seasons throughout almost eight years, the snappy dressers of Mad Man hung up their polyester to reenter the 21st century. Take a look at the former Sterling Cooper employees in their most important roles since the show ended.

What are they up to ten years after leaving advertising? 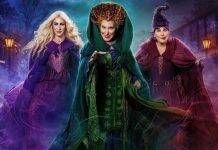 ‘Hocus Pocus 2’ | Flashback in opening will reveal the origin...