Over the weekend, actor Idris Elba fueled rumors that he be the next James Bond when he posted a cryptic tweet that sent his fans into a frenzy.

The actor caused a huge stir on Twitter after posting a selfie with the caption “My name’s Elba, Idris Elba,”—and obvious notch to James Bond, the role in which he could potentially succeed Daniel Craig.

But then, Elba followed his cryptic tweet with a photo of Public Enemy and accompanying quote from them: “Don’t believe the HYPE…”

Whether Idris Elba is keeping the James Bond rumors alive—or killing them softly—it’s a little hard to tell. But rest assure, because, even if he doesn’t become the first black 007, there’s still plenty of other actors who could carry the Bond franchise for many years to come and even refresh and updated this classic character.

From front runner Idris Elba, to first brown “double 0” Riz Ahmed, to actress Gillian Anderson (the names is Bond, Jane Bond), here’s a list of 10 actors who could totally don a tuxedo and take on the 007 mantle. 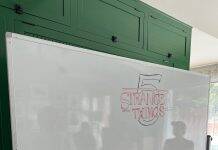