How we wish Thanos could destroy this rank of the worst superhero movies too!

From William Wilberforce in Amazing Grace to his most recent role in the Australian drama series Harrow, birthday boy Ioan Gruffudd has appeared in over 30 movies and TV shows since his lackluster first portrayal of Reed Richards back in 2005.

However, no matter all the characters he can play, his resumé will forever be stained by the Fantastic Four and its equally atrocious sequel, Rise of the Silver Surfer.

Many actors have made their careers for the iconic portrayal of a certain comic book character (we see you, Chris Evans). But much like Ioan Gruffudd, there are plenty of celebrities whose not-at-all heroic performances ended up being nothing but disappointing.  And not necessarily because of their acting (although, in some cases, it is the sole reason), but because the overall production was so bad it nearly ruined the franchise—and their careers, consequentially.

In honor of Gruffud’s birthday (not sure if this is the best way to celebrate him), here’s a list of the worst superhero movies of all time. Ryan Reynolds and Chris Evans did manage to redeem themselves with Deadpool and Captain America, respectively. But they still couldn’t escape from this list. 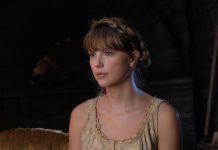