Bella Thorne might not have been invited (yet) to The Late Late Show with James Corden‘s Carpool Karaoke, but she “don’t give a f***!”

The model and actress just filmed her own version while riding shotgun with her sister.

She obviously does not care who sees her, because she went wilder than any guest on any talk show could ever go…except maybe Tom Cruise when he destroyed Oprah’s couch!

Check out this video. And get her on the show, James Corden! 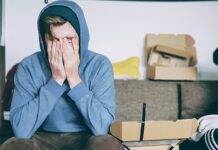