Paramount Pictures has released the first teaser trailer for “Mission: Impossible – Dead Reckoning Part One” on Monday (23). Starring Tom Cruise, in the seventh film in the franchise, agent Ethan Hunt will take a chance on yet another adventure.

The video shows the return of Henry Czerny, back to the franchise, 26 years after the first “Mission: Impossible”, as Eugene Kittridge. “Your days of fighting for the so-called ‘Greater Good’ are over,” Eugene says to Hunt in the trailer. “This is our chance to control the truth. The concepts of right and wrong, for everyone for centuries to come. You’re fighting to save an ideal that doesn’t exist. It never did. You need to pick a side.

The new spy thriller is packed with incredible action scenes and explosions. The Impossible Missions Force (FMI) agent will have to go through several obstacles, such as a fight on top of a speeding train, car chases, a fight with snipers in a desert and finally the most impressive scene, the motorcycle jumping from a cliff.

The trailer also shows the return of Simon Pegg (Benji), Ving Rhames (Luther) and Rebecca Ferguson (Ilsa) to the cast. While Hayley Atwell will be the new character Grace and Esai Morales the main villain of the film.

“Mission: Impossible – Dead Reckoning Part One” was written and directed by Christopher McQuarrie, and opens on July 14, 2023. The film’s sequel, “Part Two”, due for release in 2024, is expected to be the last in the franchise. 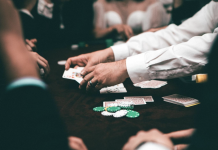 Is Poker As Glamorous In Real Life As It Is In...