The track was released in May and in the clip, Lady Gaga appears on an airstrip, in the mood of “Top Gun: Maverick”. The artist’s fans are excited and already expected that
the new song was a hit. Critics compared Gaga’s song to the classic “Take My Breath Away”, a hit in the first version of the 1980s film.

“’Hold My Hand’ is a soaring rock song with violins and guitar licks that harkens back to the power ballads of the ’80s. The song, which plays over the end credits, has already sparked buzz as a possible best original song for Gaga after her debut. . screening of the film at CinemaCon in Las Vegas,” Variety said on the release. 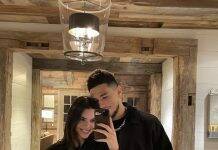