Bruce Willis, 67, appears alongside three other men playing basketball in a video shared by wife Emma Heming, 43, on Instagram. The actor showed his skills on the court and scoring a basket. “I see you BeeDub”, Emma wrote in the video.

In March, Emma revealed on social media that Bruce would be “stepping away” from his acting career after being diagnosed with aphasia.

“To Bruce’s amazing supporters, as a family we wanted to share that our beloved Bruce has been experiencing some health issues and has recently been diagnosed with aphasia, which is impacting his cognitive abilities. As a result of this and with much consideration Bruce is stepping away from the career that has meant so much to him. This is a really challenging time for our family and we are so appreciative of your continued love, compassion and support. We are moving through this as a strong family unit, and wanted to bring his fans in because we know how much he means to you, as you do to him. As Bruce always says, ‘Live it up’ and together we plan to do just that. Love, Emma, Demi, Rumer, Scout, Tallulah, Mabel, & Evelyn”, wrote in the post. 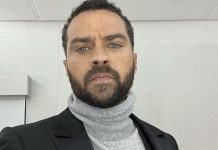 Jesse Williams Joins ‘Only Murders In The Building’ Cast For Season...