The soap opera behind Britney Spears’ life seems far from over. The singer published an audio recounting various situations experienced by her while she was under her father’s guardianship. According to her, there were moments of pain and suffering at the hands of her family, who always put her down and usurped her money.

In the 22-minute audio, the muse declared that they literally killed her from the inside. According to her, the control was so tight that they made her feel like ‘nothing’, and she ended up accepting it. Britney explained that she is afraid of people’s judgment, and that’s why she doesn’t usually disclose many items about her side of the story. She doesn’t know what she did wrong that made her receive such punishment (excessive control from her father). According to her, everything was very confusing at first, and her mother and father were involved in guardianship. According to the audio, a woman would have presented the idea of ​​guardianship to her father, and from there, everything went wrong.

Britney recounts in the audio the first day of her biggest nightmare. According to her, out of nowhere 200 more paparazzi at her door filmed her getting into an ambulance. “It was all set up, there were no drugs in my system. No alcohol, no nothing,” she declared. After that moment, control began to take place over everything in her life. The message was quickly deleted, and the singer’s Instagram profile was deactivated. In the audio you can see more details of Jamie Spears’ guardianship over her daughter. These are just a few details. The treatment method described by the singer ranges from behavioral to material items. “It was demoralizing,” she said. The conservatorship ended in 2022, and Britney is still struggling to regain 100% of her assets and her life.

Zayn Malik And Gigi Hadid Have Called It Quits And Twitter... 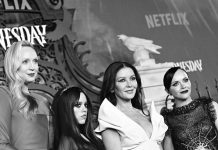 Wednesday is renewed for a second season 20 real-life couples in movies together