The new trailer for ‘Black Panther: Wakanda Forever’ was released by Marvel last Monday (3). In the video, the kingdom of Wakanda appears in a mood of mourning for the loss of T’Challa, lived by Chadwick Boseman. On the other hand, the arrival of Namor (Tenoch Huerta), reactivates the mood for a new battle. Among the scenes it is possible to notice the costume of the new Black Panther, which appears to be a woman and even moments of Riri Williams (Dominique Thorne) building and piloting armor to protect the country.

The sequel also won a poster that accompanies the trailer, and shows Shuri, played by Letitia Wright, as the focus of the characters and in a position of contrast with Namor. Awakening more indications that she will be the new heroine.

The film should also pay tribute to T’Challa, the character of actor Chadwick Boseman, who died in 2020 from colon cancer. ‘Black Panther: Wakanda Forever’ opens in theaters on November 10. 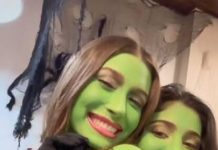 Hailey Bieber and Kylie Jenner Dress Up as Wicked Opening the...